MDinteractive is an approved CMS Qualified Registry for 2021. 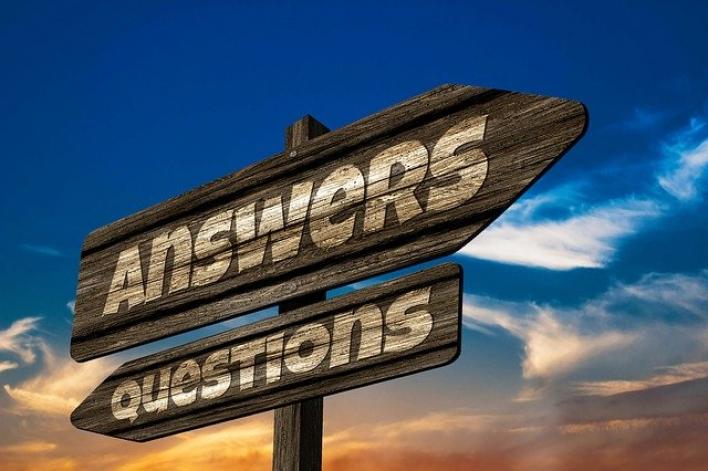 A timeframe to gradually implement the new MIPS Value Pathways (MVPs) program was recently released as part of the Proposed Rule for the 2022 Medicare Physician Fee Schedule (PFS). The proposal would allow clinicians to report MVPs beginning with the 2023 MIPS performance year. This article answers key questions about MVPs and how MIPS reporting is expected to change in the years ahead.

The Next Evolution of MIPS

The Centers for Medicare and Medicaid Services (CMS) originally established the Merit-Based Incentive System (MIPS) program in 2017 as one of two tracks under the Quality Payment Program to move Medicare Part B clinicians to a value-based payment system. While MIPS has gone through incremental changes since its inception, MVPs will mark a significant shift in how clinicians report under the program. CMS points out that the new reporting framework is aimed at moving away from siloed reporting of measures and activities towards focused sets of measures and activities that are more meaningful to a clinician’s practice, specialty, or public health priority. 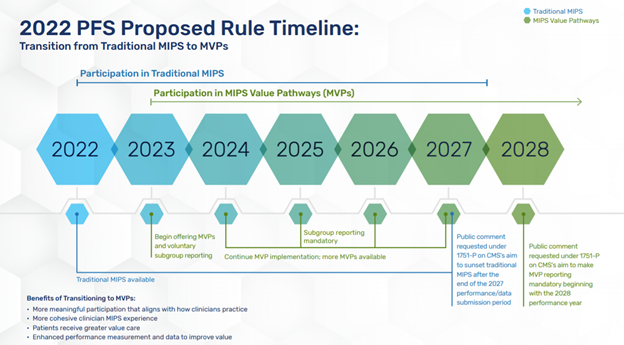 What are the MVPs?

MVPs are intended to align and connect measures and activities across all of the MIPS performance categories (Quality, Cost, Promoting Interoperability, and Improvement Activities) for different specialties or conditions. CMS has proposed seven MVPs for the 2023 performance year:

Who Can Report MVPs?

CMS would make MVPs available for certain MVP participants as outlined in the table below.

*Multispecialty groups would be required to report as subgroups in order to report MVPs beginning in 2025.

What is the MVP Registration Process?

MVP Participants would select the following at the time of registration:

Clinicians participating as a subgroup would be required to:

Participants would not be able to make changes to the MVP they select after the close of the registration period.

What are the MVP Reporting Requirements?

Under the proposed MVP framework, clinicians would report on measures and activities that reflect an episode of care or clinical condition. The MVP would incorporate a foundational layer consisting of Promoting Interoperability and administrative claims-based quality measures focused on population health. Additionally, each MVP would include clinically relevant measures and activities for the Quality, Improvement Activities, and Cost categories.

What is Subgroup Reporting?

CMS is proposing to establish “subgroup” reporting which would be voluntary for the 2023 and 2024 performance years. According to the proposed rule, multispecialty groups would be required to report as subgroups in order to report MVPs beginning in 2025.

To generate more clinically relevant and granular information about clinician performance, CMS believes that subgroups should be assessed using subgroup level data to the extent that it is operationally feasible. CMS anticipates more granular data would be available for patients, clinicians, and other stakeholders through a three-pronged approach of mandatory subgroup reporting, broad use of FHIR APIs and the creation and use of digital quality measures (dQMs).

Subgroups would consist of a subset of a group that contains at least one MIPS eligible clinician and is identified by a combination of the group Tax Identification Number (TIN), the subgroup identifier, and each eligible clinician’s NPI. Subgroups would have the same eligibility and special status determinations of the affiliated group (identified by TIN). CMS would not allow voluntary reporters, opt-in eligible clinicians, and virtual groups to report MVPs for the 2023 performance year due to implementation challenges.  To participate as a subgroup, the TIN would have to exceed the low-volume threshold at the group level (Subgroups wouldn’t be evaluated for the low-volume threshold at the subgroup level).

How are MVPs Scored?

The proposed MVP reporting framework would overhaul the existing MIPS reporting requirements. CMS intends to transition to MVPs beginning with voluntary reporting in 2023. While many of the MVP details are only proposed at this time, clinicians should become familiar with the provisions to ensure a smooth transition in the years ahead.

Forgot your user name or password? Recover it here